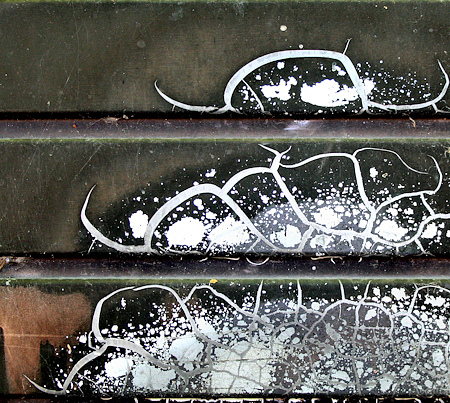 I cannot just grab my camera and set off to take pictures; I have to be switched on. Then again sometimes I set off and there is no direction in my thoughts but a chance sighting might trigger a thought, a motif, setting the mood, an atmosphere, in which the images are collected. At times I’m absorbed into playing a part; I’m no longer taking pictures I’m part of the landscape or subject, under observation. I’m observing a world and recording and observing myself and my response to the world. I don’t feel that I’m am present but an invisible observer.
I have always felt that I have had sensitivity to the past; recognition that my presence anywhere is part of a continuing process and that I must inevitably fall into that past.
Despite this sense of forward motion I have an image in my mind of a place frozen in time. Somewhere in North Wales, not far from Blaenau Ffestiniog I believe, I’m not at all certain; there is a straight stretch of road covered in a speckle of brown gravel. The midsummer sun beats down as I’m walking with my brother; I sense he is there but he is not visibly part of the image. There is the road, boggy pasture fields to the right divided by slabs of slate wired together and a long band of conifer trees to the left. Telephone poles run along the road to the right and away ahead into the distance; they are black with creosote. I can’t smell it but I’m certain that if I walk up to the telephone pole and sniff then I will smell the creosote. Something is burnt; I don’t know what or why; the smell may hang in the air.
Nothing else registers in my mind other than the fact that I think it is some time in the 1930’s; long before I am born. There is nothing else to say. This moment and place is always within reach in my mind; not always in the forefront but viewed as if through an open door; always open if I care to glance that way. I have wondered whether or not this image entirely belongs to me or I have acquired it from somewhere or someone else.

The gathering of pictures brings the past closer to me as nothing before. The act of looking, really looking, of composition, forces it; recognition, consideration of a subject, interpretation. Recently I have come to keenly feel the loss of my ‘ear’ for music. It is as if a dimension has been lost and my appreciation is less than it was before. With my photography I feel that I have gained a dimension; it is some compensation. I say ‘some’ as my response to music in the past has been deeper, more profound; sometimes nearing ecstatic. I have had some wonderful moments with my camera but no emotional response to compare.
Nonetheless I am delighted with my photographic ‘sensations’; the hair has been known to stiffen on the back of my neck.
It is when I take pictures in an urban setting that I have the strongest sensation that I’m influenced by the ebb and flow of the past. The history of any city is that of its many people; their accumulated aspirations, decisions, actions and conflicts. For me the places and buildings of a city resonate with these factors; they enrich my experience of photographic recognition.
I’m not referring to the great events of history that fill books and guides, though I find them interesting. No, my fascination is with the mundane details that appear to be of very little significance. The pile up unnoticed but are there to tell a story.

This is most apparent in the suburbs of a city or a town where the noise and activity are reduced to a background hum and the distraction influenced by the scale and dominance of public architecture is replaced by buildings and settings of a more human scale.
For the desired affect these places must be empty of people but not of the possibility that people are nearby. I seek an atmosphere acutely affected by the knowledge that people have been recently present and imminently likely to be present. Then I exist in a space between those moments, observing the absence, recording it.
Nowhere have these experiences been as strong as when I have explored the lanes and passages running behind the terraces of Dublin’s inner suburbs. Edwardian and Victorian housing patterns for the middle class include long gardens with outbuildings and mews with access via lanes to the rear. Some buildings have been converted to garages while others are in a state of gentle decay. With a perceived rise in crime, assisted by the absence of people around during the day, gateways and garden walls are often fortified or bricked up, while some have become inaccessible by generations of ivy growth.
All these modifications and abandon have their histories. What brings someone to choose the colour to paint a gate? A look at the peeling paint will show a whole rainbow of colours in the past. Why is each colour often a huge break with the previous one? Perhaps it is much about announcing a change in ownership.

Why is one gate fortified with bars, bricked up and decorated with sprays of barbed wire and broken glass while its neighbour, neglected, is left to picturesque decay? Has some crime or fear of crime caused one set of events in one place and not in other?
What happens in the night in these places, dark, empty and avoided? The signs are there; graffiti, attempted arson, abandoned condoms, discarded underwear and syringes. Fly tipping.
What goes on behind the gates, fences and walls? The front of the house might look respectable but the garden hidden behind the façade might be a riotous jungle of vegetation, mellowing the outlines of abandoned furniture, vehicles, piles of building debris and black plastic bags. Black plastic bags. Why so many? And what’s in them? Some houses appear to be unoccupied from the front but trails winding through the garden wasteland tell otherwise. What is the history here?
If faced with a blocked gateway on tearing away the ivy and pushing through could one rely on finding the same reality, the same time as that of the outside?
Roaming here I feel like a thief, a stalker, a sniper, the camera a weapon. Nervous and furtive, my mind conjures with sound track; drums and cymbals; not unlike Lalo Schifrin’s music from Bullit or Dirty Harry.
A dog barks; barks at its own echo. Is it alone all day? All night? A dog barks and a voice responds; then silence. Perhaps something else is moving about; secretively. What’s the secret?

A gust of wind will suddenly rush out of nowhere, tearing at clothes and hair; rearranging the dead leaves and litter. What is that curious smell? Looking up, the trees are swaying in the breeze and the sun illuminates broken glass defending a wall top. The shattered end of a champagne bottle and a coloured wine glass flash, reflections of gentle colours and past celebrations long past.
This takes so much time. Halting after a few footsteps and looking all around, measuring, judging; taking in the sounds and the smells, the feel of the ground beneath ones feet. The weight of the past presses in on me; I feel it with an unnamed sense. Sometimes the pressure is almost too much and I wonder about turning around and walking away.