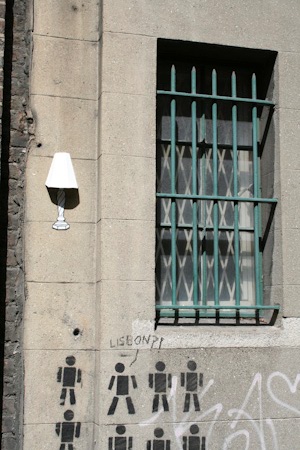 As capital cities go Dublin is small and not very beautiful. It’s busy, densely occupied and has few places to escape the constant heavy traffic.
But Dublin has a great reputation for hospitality and if you are looking for alcohol based entertainment the city is unrivalled. The pubs and bars, restaurants and clubs are all confined to a small area and the streets are packed with visitors and the local residents on weekend evenings that begin on Thursdays.
Dublin is also a city where walking will take in most of it’s attractions and show visitors the run down areas that are only a stones throw from Temple Bar; the entertainments centre. Many of these decaying and overlooked places are survivals of the medieval street pattern; narrow alleys and back streets. These are the parts of any city that for me that are so interesting, where the graces rub shoulders with the ripped backside.

These places are as decorated with graffiti as any other cites back streets. And like most other cities the graffiti is aerosol based repetitious tagging and broad sweeping blocks of bright colours and sharp black outlines. Being so familiar it gets only a brief glance.
In Dublin, however, there seems to be something more than the usual going on and for me a walk in the city has become something of an adventure.
I first spotted ‘I love lamp’ as posters in the area where I live, the Liberties, to the west of the city centre; an outline of a lamp with a heart on the shade. They were pasted up everywhere and I was seeing them long before I thought anything of them as there are lots of other paper pictures and stickers amongst the usual graffiti.

What makes the difference is that the ‘Lamp Lover’ followed up this basic design with a whole range of different shapes and styles. They also varied in size; some are a nearly a metre high and made up of 6 and 8 sheets of A4 paper. Many of these are now gone, ripped off or worn away by the weather, which is part of their charm.
Later variations appeared that show a series of lamps printed on thick card. These tend to be small and are subtly and whimsically placed on building corners and edges, and over arches where they are out of reach and less obvious. With these the artist moved with growing confidence from advertisement to showmanship. Now looking for these and finding them is a joy.
The next development, which I confess took my breath away, was the move into three dimensions; the card outline of the lamp, but with a shade extending out from the wall and a hanging light switch. I now started to go out especially to look for them and found many designs including stencilled images and postage stamp stickers. There are other artists out there working with stencils and painting designs on tiles that are then glued up on wall. In some places they cluster together as if some places are notice boards or exhibition areas.
So who has been developing the ‘I love lamp’ theme?

A search on the internet showed that I was not alone in looking for the artist. Two web sites are in existence but anonymous. The comments of others share the thrill, the joy of a shared mystery and the fun of endless speculation. But these sites only deepen the mystery for what here is real and what is false?
I have not found the lamps all over Dublin city, but in the west, each side of the River Liffey, and in the nearer southern suburbs. The haunt of the ‘Lamp Lover’ includes the streets around the National College of Art and Design in the Liberties (where I live) and the Institute of Art, Design & Technology, Dun Laoghaire on the coast to the south of Dublin. There are obvious conclusions to draw here, or are they there to mislead.
There are apparently many more designs that I’ve yet to see for myself and early painted images too. They have turned up in Denmark and Holland and could be near you sometime soon…..or already are.
Any day soon I will be walking along one of the alleys or back streets of Dublin and find a real lamp, lit by a battery, glued to the wall.